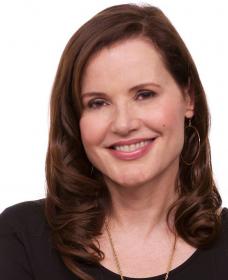 Academy Award winner Geena Davis is one of Hollywood’s most respected actors, appearing in several roles that became cultural landmarks. Earning the 2006 Golden Globe Award for Best Performance by an Actress in a Television Series – Drama, Davis broke ground in her portrayal of the first female President of the United States in ABC’s hit show “Commander in Chief.”In 1989, Davis received the Academy Award for Best Supporting Actress for her role as the offbeat dog trainer Muriel Pritchett in Lawrence Kasdan’s “The Accidental Tourist.” She was...
Read more >>

again nominated for an Academy Award and Golden Globe for her performance in Ridley Scott’s “Thelma & Louise,” in which she co-starred with Susan Sarandon. Davis went on to receive a Golden Globe nomination for Best Actress for her portrayal of baseball phenomenon Dottie Hinson in “A League of Their Own.” Davis made her feature film debut starring opposite Dustin Hoffman in “Tootsie.” She went on to star in such films as “The Fly,” “Beetlejuice,” “Angie,” “The Long Kiss Goodnight,” and “Stuart Little.”

Few have achieved such remarkable success in as many different fields as Davis has: she is not only an Oscar and Golden Globe winning actor, but a world-class athlete (at one time the nation’s 13th-ranked archer), a member of the genius society Mensa, and is becoming recognized for her tireless advocacy of women and girls nearly as much as for her acting accomplishments. She is the founder of the non-profit Geena Davis Institute on Gender in Media, which engages film and television creators to dramatically increase the percentages of female characters – and reduce gender stereotyping – in media made for children 11 and under.

Davis was appointed Special Envoy for Women and Girls in ICT for the UN's International Telecommunication Union (ITU). Davis is also an official partner of UN Women, working toward their goal of promoting gender equality and empowering women worldwide. Davis is the Chair of the California Commission on the Status of Women. Davis holds honorary degrees from Boston University, Bates College and New England College.

Founding the Institute of Gender in Media
How popular media affects girls' career choices
Male to female ratio in family films and television
Meet Geena Davis
Raising awareness about gender in media in Hollywood
The hyper-sexualization of girls in the media
What you should be saying while your kids watch TV
A League of Their Own and empowering women
Actor vs. actress and why it matters
Gender stereotyping in popular media
How watching the media for hours on end affects expectations of reality
Male vs. female content creators in media
Support the Institute on Gender in Media
The "Guess Who?" Children's Educational Program
The role of gender in film and television worldwide
What you may not realize is going on in family films